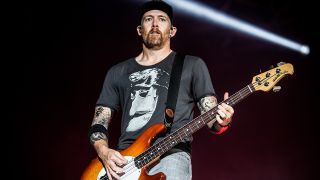 Linkin Park’s Dave Farrell says the band have been working on new music ideas during the current coronavirus lockdown.

The bassist was a guest on the Dan Really Likes Wine show to do a live tasting when he was asked if the quarantine has proved to be a period of creativity for him.

Farrell said: “For us, with the band, we've been kinda writing and doing that before this all started. Casually at this point, we're doing Zoom meetings to eat lunch together and say hi.

“We’re not able to get together and write or do that whole bit. So I’m working at home a little bit, working up ideas."

He added: “I’ve been playing a lot of drums just to do something new. I’ve been doing that for the last year and a half and purposely making as much noise as possible to create my own space in the house!”

Back in December 2018, Farrell suggested it was possible that Linkin Park could record together following the death of frontman Chester Bennington in July 2017.

He told SiriusXM: “The five of us still love getting a chance to hang out. We hang out quite a bit. I think we will do music again – we all want to. We all still enjoy being together and being around each other.

“But we have a huge process to figure out what we want to do and what that’s going to look like. I don’t have a timetable for how long that’ll take. I’ve never been down that road, so it’s really hard to put a time or a day.”

Farrell’s comments were followed last year by the band’s Mike Shinoda who told Rock Antenne that any progress in the band would have to “happen naturally.”

He added: “If we find somebody that’s a great person that we think is a good personality fit and a good stylistic fit, then I could see trying to do some stuff with somebody,” but he added: “I wouldn’t want to ever feel like we were replacing Chester."

Last month, Linkin Park reported they would be celebrating the 20th anniversary of their debut album Hybrid Theory throughout the course of 2020, and called on fans to help them mark the milestone by asking for everything from ticket stubs to video and pictures of the group.