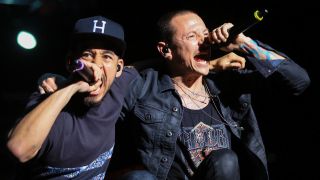 Linkin’ Park’s Mike Shinoda has hit back after claiming his bandmate Chester Bennington’s “we kept metal alive” comment was misconstrued by the media.

The vocalist and guitarist leapt to the singer’s defence, explaining that the band “made the case” for successful metal in an industry commercially saturated by pop music after they launched their 2000 debut album, Hybrid Theory.

“He basically said that pop music was ruling the world, and we made a case for commercially viable heavy music – no big deal. Maybe not the best choice of words, but the sentiment wasn’t as outrageous as today’s rock news would have you think.”

The full feature on Linkin Park’s Hybrid Theory is in issue 286 of Metal Hammer, which includes the 100 greatest albums of the 21st century. It’s out now in print and via TeamRock+.

The band are currently working on their seventh album, the follow-up to 2014’s The Hunting Party.

Blogs Of War: Why It’s Time For Linkin Park To Come Back To Metal