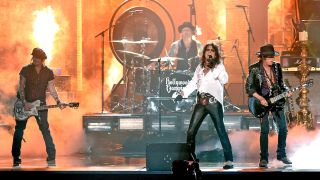 The explosive tribute came after Ghost were named winners of the Best Metal Performance Award for Cirice, ahead of Slipknot, Lamb Of God, Sevendust and August Burns Red. Muse won Best Rock Album for Drones.

Dave Grohl introduced the Vampires’ TV debut by saying: “Many of us play rock’n’roll but a rare few among us are rock’n’roll. Lemmy was rock’n’roll. He was a rebel, an outsider, one of a kind, and a way of life. He was Motorhead. He was a legend and I was proud to call him my friend.”

Cooper, Joe Perry, Johnny Depp, Matt Sorum and Duff McKagan then hit the stage, performing Ace Of Spades in front of a bass rig featuring Lemmy’s trademark high mic stand, cowboy hat and bass. They appeared to have won over much of the bemused audience by the end of their short set.

Ghost drew attention from uninformed attendees when they arrived at the ceremony in their stage gear. The LA Times asked: “Who are these people and why is this happening?” Frontman Papa Emeritus said in his brief acceptance speech: “Thank you so much for this. This is a big, big thing for us, obviously. A nightmare has just turned into a dream – thank you all for that.”

Slipknot, who lost out to Ghost over their track Custer, had also been nominated in the Best Rock Album category for .5: The Gray Chapter.