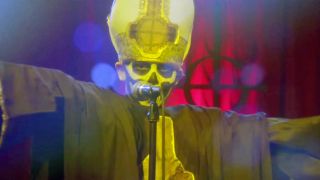 Ghost have released a video for their track Cirice, taken from their third album.

The video for Cirice is set at a school talent show, with children playing the roles of Ghost. Cirice is portrayed by the actress and model Masha Malinina, who says: “I was honoured to be in the music video as Cirice. It was so fun and it turned out great.”

Ghost play this year’s Reading and Leeds festivals and will tour Europe this summer: