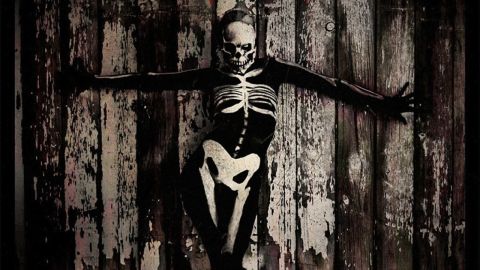 Born during the darkest and most disconsolate time in Slipknot’s career, this album is a sledgehammer to the hearts and minds of many fans. From the deep fires of pain and bitter remorse, the band moulded their anguish like molten metal into a gritty, shuddering record.

Like a chainsaw being started in winter, it splutters into life and then picks up speed, becoming deadly and unstoppable. It does, however, fall short of the fans’ high expectations. Lyrically, songs like The Negative One sound more like Stone Sour songs than Slipknot’s; if you buy a Slipknot album you expect to hear a Slipknot album.

The Clown speaking at the beginning of XIX and in Custer is somewhat superfluous and generic. Nevertheless, a wall of high-voltage guitars play credible riffs and define the atmosphere of this twisted gem of an album. As always, Slipknot’s percussion is as agile and violent as the spit-fire from a machine-gun.

.5: The Gray Chapter is a first stepping stone. At the moment the masked fiends are trying to find their feet and are still a little lost as they adjust to their two new partners in crime. There is still enough here to inspire hope for the band in the future, but this album is not quite there yet./o:p