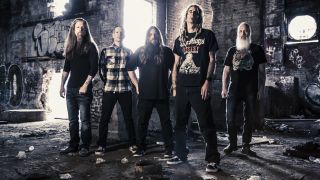 Lamb Of God will revert to their original name Burn The Priest for a new album of covers.

They formed under the name in 1994 and released their self-titled debut album in 1999. They subsequently renamed to Lamb Of God and have gone on to launch seven more studio albums.

Now they’ve gone back to their roots for Legion: XX, which will be released on May 18 via Nuclear Blast and features cover versions by bands including Melvins, The Accused, Big Black. S.O.D., Bad Brains, Cro-Mags and Agnostic Front.

Guitarist Mark Morton explains: “To truly understand the essence of the Burn The Priest, one must first consider the landscape in which it began – the mid-90s.

“Grunge and alternative music ruled the airwaves. Social media and the internet had yet to assume their role as our collective sources for entertainment and cultural exchange. It was a time when DIY ‘zines turned us on to new bands and regional scenes, and ‘copy and paste’ still implied a print shop and a glue stick.

“As our sound and songs developed, so did our goals. We began playing basement parties and warehouse shows and in doing so, we realised that the energy we were creating was transferable.

“The shows we played in those squats and warehouses in Philadelphia and the people we met there are forever embedded in our collective consciousness and the DNA of our band.”

To mark the album announcement, they’ve released a stream of Inherit The Earth – originally recorded by The Accused.

Vocalist Randy Blythe says: “I’ve been an Accused fan since I was 14 when they were on the Thrasher Skate Rock Volume 3 compilation with C.O.C. and all these amazing crossover bands. Their singer Blaine Cook was a huge influence on me, vocally.”

Legion: XX is now available for pre-order. Find the cover art and tracklist below.

Look out for a world exclusive interview with Lamb Of God about the album in the upcoming issue of Metal Hammer magazine.

The 10 best Lamb Of God songs, as chosen by Sworn Amongst