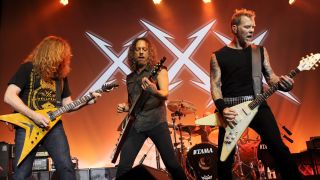 Kirk Hammett says he can understand former Metallica guitarist Dave Mustaine’s long-held anger at being fired from the band.

Mustaine was Metallica’s lead guitarist until he was fired in 1983 and replaced by Hammett. He went on to form Megadeth but has been critical of his former bandmates in the years since.

Hammett says he has empathy for Mustaine’s situation and adds that he believes some of the wounds were healed when Mustaine joined Metallica onstage at the Fillmore in San Francisco in 2011 to celebrate the band’s 30th anniversary.

Hammett tells Word Of Wheeler (via Blabbermouth): “I’ve always shown a lot of empathy for him, understanding that he was just pissed off. It’s the equivalent of the woman of your life leaving you, when your band kicks you out. I’ve never been kicked out, but I can imagine it’s a horrible experience, especially if it’s a band that you feel really passionately about.

“So I can understand Dave’s plight over all these years. But I will also say that when we did these 30th-anniversary shows at the Fillmore and we invited Dave to play on all those Kill ‘Em All songs, man, it felt so good to have him playing on stage.”

He continues: “And I could see from the look on Dave’s face and just from his whole attitude that it was super-cathartic for him. And it’s interesting, because since then, I think Dave’s relationship with us is a little bit better now. I’d like to think that that whole thing just kind of healed some scars that needed to be healed.”

Metallica recently released their 10th album Hardwired… To Self-Destruct and have announced a number of tour dates, with more to follow.

Thinking Out Loud: Dave Mustaine on drugs, politics and religion