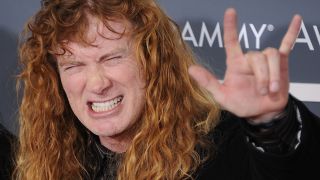 In our weekly feature Thinking Out Loud, we find out what’s going on in the minds of the great and good. This week, we peek inside the brain of Megadeth frontman, author, vintner and coffee purveyor Dave Mustaine…

“In retrospect, I get it: if you’ve got a guy that gets violent when he gets drunk, and he’s kinda drunk 24⁄7, then having him around you all day long probably isn’t good for business. I would have done the same thing [as Metallica did]. I had a problem with alcohol, and it cost me my job and cost me two very dear friends. But I didn’t have a Plan B. Being a successful musician was all I ever wanted, and I wasn’t going to let that dream die.”

“I felt what we had done with Metallica was so fresh and invigorating. I’d been living on my own since I was 15. Every day was get up and play guitar and sell pot for a living. That was my existence. To be able to have a real job playing music, c’mon… Once that looked like it wasn’t going to happen, I went into conservation mode. That’s when Megadeth was created, because I had survival skills ever since I was a kid and my parents got divorced. I’d like to think there was a lot of great music that came out of the creation of Megadeth, but I don’t really think it was destined to be any different because there was just so much personality between the four of us.”

“There were so many days when the other guys were dope sick, lying on the floor puking and shitting their pants and I was thinking ‘Glamorous life!’, you know? But the actual making of Peace Sells… was much more enjoyable for me. We went into The Music Grinder, which was in was a kind of cool, fashionable area and there were a lot of hot chicks around, a good hamburger joint across the street, a cool hot dog place at the end of the road, and we were living hand to mouth at the time. If we had enough money to get our heroin and a good hot dog, it was a good day.”

“The sad thing is the cowardice of the internet; people being able to say stuff from behind a keyboard, just lashing out. That’s really hurt a lot of musicians. They can’t say how they really feel. They have to play it safe.”

“When I closed my book I started weeping, I was so happy. I tried to make it truthful – even if I incriminate myself. For the first time in my life I felt understood. I got an F for English in school, so to be able to say I’m a New York Times best-selling author? That’s an incredible feeling.”

“The sad thing in America is that we hate on people because of how they vote. You can say what you want, you’re entitled to your opinion. I have my opinions, you have yours. It’s like, ‘Dude, if we walk into a McDonalds and you get a Big Mac and I get a Quarter Pounder, I ain’t gonna hate on you.’ It’s your choice – why is it different when it comes down to who you think should run the country?”

“After being baptised as Lutheran and brought up as a Jehovah’s Witness, then getting into witchcraft, black magick and Satanism, where else do you go? One day I found myself looking at a cross and decided I had nothing to lose. And so far my life has been profoundly different. In what way? Well, before when I got pissed off I’d assault people. Now I go, ‘Grrrrr’ and keep it inside.”

“I’m a perfectionist, and that’s a bummer in several different ways. I’m super-meticulous – I think that might drive a lot of people around me crazy.”

Megadeth’s album Dystopia is out now. The band are currently on tour.