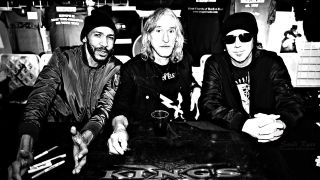 In April this year, King’s X reported they were about to return to the studio to begin work on their first album since 2008’s XV.

Since then, Doug Pinnick, Ty Tabor and Jerry Gaskill have been holed up in Blacksound Studio in Pasadena, California, with Michael Parnin, who has previously worked with artists including Rage Against The Machine.

Tabor says: “We've got most of an album already recorded, and we're going back to Los Angeles in August for a couple of weeks to finish it up. That's how close we are. We're almost done.”

As for how they approached the record, he adds: “I think every album is a little different. It just depends on where everybody's at, and how much music is brought in versus how much we're going to need to create on the spot.

“We've done things so many different ways that there really is no one way, but on this latest record, we did it more like the old albums where we all brought in a whole lot of music and gravitated to the stuff we liked the most.

“Before we knew it, we were recording 17 new songs that we loved. It's been a lot of fun. We're going to try to put as much of this on the record as we can and have at least a double vinyl.”

Speaking previously about the opportunity to work with King’s X, producer Parnin said: “Some of my favourite and most artistically rewarding projects have been working with Doug over the past 10 years, namely Strum Sum Up and the fun Hendrix tribute album we did together.

“Likewise, I’m honoured and looking forward to working with Jerry and Ty who are each masters of their craft.”

King’s X are currently on the road across the US and will return to the UK and Europe later in the year.