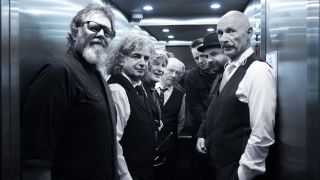 In April it was reported that King Crimson’s studio work would be coming to streaming services.

Today, all 13 albums have been released on Apple Music, and they’ll arrive on Spotify on June 10.

All the records have been made available in celebration of King Crimson’s 50th anniversary.

Speaking previously with Rolling Stone, the band’s manager David Singleton said: “The reason we’ve been slow on Spotify is that, unlike apparently the whole of the rest of the industry that’s been telling us that physical is dead, we’ve had rising physical sales for probably the last 10 years.

“But that argument was valid for a while, and it isn’t anymore.”

He added: “In the end, our prime function is to serve the music and make the music available, and Spotify has now definitely become one of the places that people, particularly younger people, find music.”

Here’s a list of what King Crimson are up to throughout 2019.