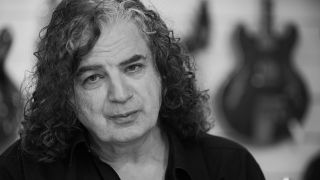 It’s titled Secrets & Lies and it's set to arrive in late 2020 after the King Crimson vocalist and multi-instrumentalist signed a new record deal with Inside Out Music.

Jakszyk says: “I’m genuinely thrilled to be signing to Inside Out. I’ve gotten to know InsideOut label-head Thomas Waber over the last few years and he has continually encouraged me and subsequently given me the confidence to make music for myself again.”

Waber adds: "I am really happy that Jakko has finally found the time to finish another solo album and that we are going to be working with him on it.

“We are always looking to work with the best talent in our genre and Jakko is most definitely someone who fits that description!”

Jakszyk's last solo album was 2009’s Waves Sweep The Sand, which was followed in 2011 with A Scarcity Of Miracles: A King Crimson ProjeKct which he recorded with Robert Fripp and Mel Collins.

King Crimson were due to tour across North America this summer, but those dates have been pushed back into 2021 due to the coronavirus pandemic.

Announcing the news, the band said: “Although it is possible that some venues in the US and Canada may open again in time for shows this June and July, there seems little possibility that the threat from coronavirus will have completely faded – and we have no desire to risk the health of the band, the crew or the audience. No one should have to decide between a concert and a threat to their health.”

A full list of rescheduled dates will be announced in due course.