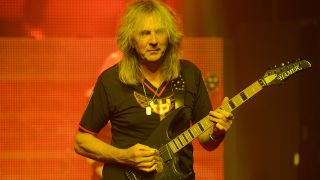 Judas Priest’s Glenn Tipton has thanked fans for their support over the past year, which he’s described as a “tough one.”

The guitarist issued a statement addressing his ongoing battle with Parkinson’s disease in March 2018, with his Priest bandmates then setting up the Glenn Tipton Parkinson’s Foundation in the summer of last year which has now raised more than $150,000.

Tipton celebrated his 72nd birthday last week, and in a message on Facebook he says: “I am overwhelmed by all the kind birthday messages.

“I would like to thank every single fan for your support and love – particularly over the past year which has been a tough one for me. Thank you all so much!”

In March, Tipton’s daughter Karina ran the Barcelona marathon to raise money for her father’s foundation and raised £5981.

In other Priest news, frontman Rob Halford has released a short video reminding fans that they can still cast their vote for the band in The Rock And Roll Hall Of Fame ballot.

Fans can vote once a day through January 10, 2020, and pick up to five nominees per ballot. Search Google for “Rock Hall Fan Vote” or “Vote” with any of the nominees name to cast your choice immediately.

Earlier this week, it was confirmed that Judas Priest would headline the UK's Bloodstock Open Air in 2020 to celebrate their 50th anniversary.