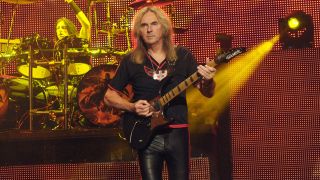 News of his diagnosis became public in February, when the band issued a statement saying that he would be taking a step back from Priest’s Firepower tour dates. Producer and guitarist Andy Sneap has taken his place on the road.

Now Tipton has issued his own statement on the band’s website where he addresses his health and thanks fans, friends, fellow musicians and his bandmates for their continued support.

Tipton says: “By now many of you will know I won’t be doing the Judas Priest tour because of health issues. I’m so sorry but four years ago I was diagnosed with Parkinson’s and was told by my specialist that I had already had it for over 10 years.

“I knew something was wrong with my co-ordination and fluency regarding my playing, but I worked around it and battled on. I have good days and bad days but the disease is degenerative and I would never want to compromise the greatest metal band in the world.”

Tipton continues: “It was therefore during the last rehearsals I decided to step down and have Andy Sneap fill in. He’s a great guy and I’m sure he’ll do a great job – I’m sure the band will be as strong than ever.

“I have been overwhelmed by the massive support and love I’ve had from other artists and from fans all over the world and from many friends and metal maniacs out there.

“It’s not the end for me – I’ll still be able to write and record and on good days even join the band on stage for a few songs. With new medication and advances being made, who knows what the future holds.

“But one thing’s for sure – it will certainly involve Priest!”

He adds: “Finally the biggest thanks goes to Rob, Richie, Ian and Scott who have stood by me and supported me through everything.”

Judas Priest have just kicked off their tour in support of new album Firepower. Find a full list of their upcoming live shows below.