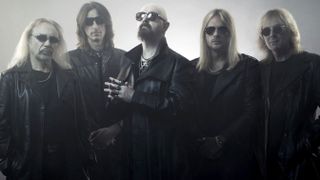 Judas Priest frontman Rob Halford says it would be a “dream-come-true moment” if the band were to be inducted into the Rock And Roll Hall Of Fame next year.

The veteran UK outfit were named on a shortlist of nominees for the 2018 ceremony yesterday – the first time they’ve appeared on the ballot despite being eligible since 1999.

And Halford says the fact they’ve finally been nominated helps to “chip away” at the prejudice that has traditionally surrounded heavy metal.

Halford tells Billboard: “This is our Oscars. When the nominations come up and the inductions come up, you often wonder what it would feel like if you were able to be onstage at that moment, making an acceptance speech and particularly having the pleasure to be in the company of all the other musicians and industry people.

“So, yeah, if we do get in it will be an absolute dream-come-true moment. Fingers crossed.”

He adds: “I’ve often talked about metal being the underdog. We remember the times through the punk and New Wave moments when it was proclaimed that heavy metal was dead, it didn’t stand a chance of surviving, that it was Neanderthal music that had limited scope and wasn’t very intelligent and all those bad things.

“I still don’t understand the kind of pushback that we still have to bump up against now and again, but this recognition by the Hall Of Fame helps to slowly chip away at that kind of stereotype.

“The metal dog is wagging its metal tail, which is a great feeling. We do deserve this.”

If they are inducted, former guitarist and Priest co-founder KK Downing could be one of the names enshrined into the Rock And Roll Hall Of Fame. He left Priest under a cloud in 2011 after spending more than four decades in the band.

But Halford says if they do get the nod, he’d welcome a reunion with the guitarist.

He says: “Everything’s on the table for anyone that’s been associated with Priest in and out of the band. It’s going to be an absolutely spectacular night, should we be inaugurated.

“I think it’s now time to start cracking the metal whip and vote, vote, vote! I shall be going into my politician mode shortly!”

For the sixth year running, fans are able to register their vote at the official Rock And Roll Hall Of Fame website until December 5. The five artists who receive the most votes will make up a “fan’s ballot” that will help determine who makes it in.

Judas Priest are currently working on the follow-up to 2014’s Redeemer Of Souls, which is expected to be released in 2018 and accompanied by a run of tour dates.

They were recently confirmed as headliners for next year’s Bloodstock festival in the UK.