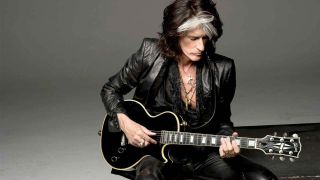 Already writing songs for an upcoming solo album, Perry found time to record the festive project after the autumn release of his memoir, Rocks: My Life In And Out Of Aerosmith.

The guitarist explains how Depp’s musicality first appeared on his radar.

Perry tells Guitar international: “I’ve been a fan of his acting for a long time. I remember seeing him in the movie Chocolat, where he plays the gypsy guitar player. I was really impressed. You could tell that he was really playing guitar versus cutting back and forth to a musician.”

“In the movie he plays a lot of Django Reinhardt stuff. I didn’t know him at the time, but remember telling myself that someday I have to get a guitar lesson off him if I meet him since I don’t know any of that type of stuff.”

He continues: “As it turned out, about four years later he dropped by the studio when Aerosmith recorded our last studio record with Jack Douglas. Jack knew him and asked him to come down. We started talking music and guitars and that’s where our friendship started.”

The pair reconnected as the Aerosmith guitarist was planning to record the Christmas project, explains Perry: “I’ve been out here in a L.A. for a while now since the book tour ended and he said I could use his studio, so I have been working on some solo stuff in my spare time with what little I have.”

“I’ve always wanted to do a Christmas CD with Aerosmith; it’s one of those short list things that we never got around to doing, like a blues CD or a cover CD of rock songs. I had some time and decided to cover a few Christmas songs for an EP and put it out on iTunes. They turned out lot better than I thought they would.”

Perry adds: “Johnny came by to listen and we were planning to do Run Run Rudolph, as we are both big Chuck Berry fans. It was the perfect chance to have him lay a rhythm track down alongside mine. It worked great as we were both ‘Chuck Berry’ing-out.’”