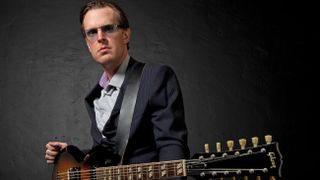 Joe Bonamassa will perform a free show at Liverpool’s Cavern Club next month.

The bluesman will perform for 300 invited guests at the iconic venue on June 27 as a warm up to his Salute To The British Blues Explosion tour in July.

Bonamassa will be running ticket giveaways for the intimate show via his website and social media channels in the coming weeks.

He says: “This is a once in a lifetime opportunity for me. I’m so excited to be performing the British Blues Explosion concerts for very first time at the Cavern Club, the same venue where the Beatles first played.

“It’s the perfect venue for me to showcase the music of Jeff Beck, Eric Clapton and Jimmy Page. I hope my fans will get a kick out of it as much as I do.”

Bonamassa released his latest album Blues Of Desperation in March.