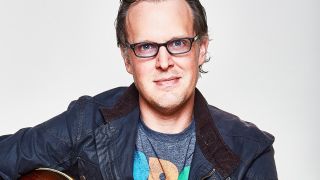 Joe Bonamassa has released a video for his new single When One Door Opens exclusively with Classic Rock.

The track has been taken from the guitar maestro’s upcoming and as-yet-untitled album, with the sprawling song recorded at London’s world famous Abbey Road Studios – the same location he recorded A Conversation With Alice, which made its debut last month.

Bonamassa co-wrote When One Door Opens with his long-time producer Kevin Shirley and songwriter Pete Brown, with the guitarist saying: “This is the first track off my new album and I'm very excited for everyone to hear it.”

The new song comes after Bonamassa unveiled his new project The Sleep Eazys back in March. They released their fully instrumental album Easy To Buy, Hard To Sell last month through Provogue/J&R Adventures.

Meanwhile, Bonamassa’s Keeping The Blues Alive Foundation is currently providing financial support to touring musicians who are suffering financial hardship due to the postponement of the majority of the live music scene amid the coronavirus pandemic.

Bonamassa says: “The more money raised, the more musicians that will receive funding to help them get through these challenging times and ultimately back on to the road when the time is right.”

You can buy When One Door Opens directly from Bonamassa's website.