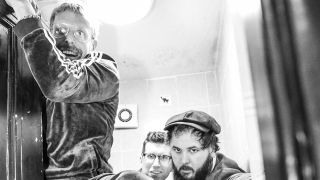 London-based space/krautrock trio Japanese Television have streamed their brand new single Bee Cage. The track is taken from the band's upcoming EP III which will be released through Chicago label Tip Top Recordings on September 4. You can listen to the track in full below.

Bee Cage is described b y the band as "an expansive, groove-laden astral treat that encapsulates the bands rhythmic jams and dramatically sets the tone for the full release. Follow-up’s Martian Soup and Falling Spikes lean into their more slacker, laid-back noise-outs but at no point do they relent. Hot Sauce, an immersive live favourite, revels in its own delirium before closer Moon Glider sees us off with intoxicating headiness."

Japanese Television formed in 2018 over a shared love of fuzz boxes, Joe Meek and UFOs. EP III  was recorded live to an old 8 track machine with The Wytches’ Kristian Bell following the success of EPs I & II which both sold out first and second pressings immediately.

The band have also announced live dates for March 2021. Japanese Television will play: