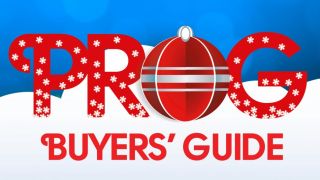 Stuck for the perfect gift for the prog fan in your life? Or maybe you’re looking for ideas for your own festive list? Well, look no further because we’ve collected some of the best prog box sets and deluxe packages from the last 12 months and squeezed them into one handy guide. What discerning progger wouldn’t want Father Christmas filling his bulging sack with at least one of these epic packages?

And for that extra special something else, why not treat yourself or a loved one to a Prog Magazine subscription? We’re offering up to 65% off 12 months of your favourite magazine for a limited time.

Want to dip into one of Liverpool’s finest prog bands but not sure where to begin? How about this gorgeous double vinyl set? It contains their musical highlights from the last 10 years, including the favourites Thin Air, Untouchable, Dreaming Light and Springfield. The 13-track has been carefully curated by the band’s Daniel Cavanagh, who’s also written exclusive sleeve notes, and the gatefold design makes the most of Travis Smith’s stunning artwork. A beautiful introduction.

Relive Ayreon’s first ever live shows with this five-disc earbook which includes live versions from the project’s back catalogue. Recorded during the September 2017 gigs, these 28 live recordings feature a star-studded cast of 16 vocalists and 11 musicians. Credits include Damian Wilson (Headspace), Floor Jansen (Nightwish), Anneke van Giersbergen (VUUR), Jonas Renkse (Katatonia), and a very rare performance from founder Arjen Lucassen himself. It’s a wonderful souvenir of three very special performances from one of Lucassen’s most ambitious ventures.

What do you get the Big Big Train fan who’s got everything, including the umbrella? This triple vinyl package of course! Recorded at 2017’s sold-out live shows at London’s Cadogan Hall, this heavyweight vinyl package also comes with an expanded booklet and exclusive poster print.

Merchants Of Light’s setlist focuses on their most recent studio recordings with a few surprises thrown in so you can marvel at the live versions of Folklore, Experimental Gentlemen Part Two and Last Train while reading all about the international collective’s colourful history.

Although Brian Eno’s standard six-disc affair for //Music For Installations// would make a lovely gift, this limited edition is really something else. Not only does the super deluxe package contain new, rare and previously unreleased music from 1986 to the present day, but it also includes a 64-page plexiglass cover book with rare and unseen exhibition photographs, plus a new essay by Eno himself. It’s electric!

Jethro Tull – This Was (box set)

Released to coincide with the band’s 50th anniversary, this four-disc, Steven Wilson mixed deluxe box comes with a hardcover book containing an extensive history of the album, Ian Anderson’s track-by-track annotations and previously unseen photographs. Add to that the bonus tracks, BBC sessions and other rarities and you’ve got a fantastic gift for the discerning Jethro Tull fan.

Lovingly remastered by the same audiophiles behind Pink Floyd’s 2011 reissues, the combination of these two CD box sets span Kate Bush’s entire back catalogue. Part one contains her first seven albums from The Kick Inside to The Red Shoes, while the 11-disc follow-up explores her more recent studio output including Director’s Cut and 50 Words For Snow, with additional unreleased material and alternate mixes. This mammoth set is also available on four individual vinyl boxes. Wow!

In 2016, King Crimson went on a European tour, visiting countries they hadn’t played in for more than a decade. This triple album box set commemorates that with their full Vienna set, as well as the live recorded debut of Fracture from the Copenhagen show. The third disc contains previously unreleased material sequenced from the soundscapes they improvised each night. There’s also a booklet with tour notes and photographs making this the perfect tour memento.

This CD/Blu-ray box is the ultimate version of Marillion’s 1994 concept album, containing not just the original but also Steven Wilson’s new remasters, including his famed 5.1 mix. Also included are Michael Hunter’s new mixes of their Paris’ La Cigale show in 1994, promo films and a new documentary featuring the band’s recollections of the album recording, entitled It All Begin With The Bright Light. An essential purchase for Marillion fans.

For the very first time, all Nightwish’s vocalists have been brought together in one vinyl package. This limited edition triple set spans their musical career so far with demos from the hugely successful Finnish band’s early years right through to their most recent studio album, Endless Forms Most Beautiful. There are 22 remastered tracks in total, including the crowd pleasers Nemo and End Of All Hope, and there’s even a cool 24-page booklet. It’s a dark box of wonders.

He might be one of prog’s most famous drummers but Phil Collins has enjoyed an extremely varied musical career, and a large chunk of that is captured on this four-disc box which focuses on his collaborations from the 1970s onwards. There are snippets of his work Genesis and Brand X, right through to live appearances at The Secret Policeman’s Other Ball and The Montreux Jazz Festival. Boasting 59 tracks in all, this compilation is the very definition of the word ‘eclectic’ and it’ll fill a lot of gaps in your Collins collection.

Rush’s classic 1978 album has been given some very special treatment with this collector’s edition. Comprising a total of six different playable formats, this lavish set includes the remastered album on CD and vinyl, as well as a 5.1 mix and Pinkpop footage on Blu-ray. There’s also a hardcover book packed with new artwork by original album designer Hugh Syme, a replica of the 1979 UK tour programme for The Words & The Pictures, a poster and an iron-on patch. As if that wasn’t enough to get you salivating, there’s also restored audio from Rush’s 1979 Pinkpop Festival performance and a version of 2112 from 1978.

Packaged with Roger Dean’s artwork, this limited edition eight-disc deluxe version of Broken Skies... collates highlights from Steve Hackett’s career between 1984 and 2006. It’s the perfect sequel to his 2015 Premonitions box set. There are recent live rarities and bonus tracks alongside remastered versions of songs including Tristesse and Let Me Count The Ways. This edition also comes with a 60-page art book packed with liner notes, rare photos and lyrics.