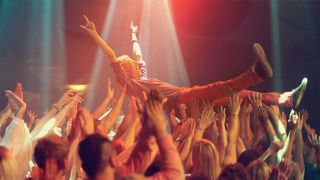 A new survey claims that most people lose their appetite for new music by the time they turn 30 – and that many music lovers are stuck in a rut.

Commissioned by streaming site Deezer, the survey finds that something called “musical paralysis” – when music fans stop discovering new music – is most likely to hit those aged 30 years and six months.

Quizzed on the reasons why they stopped caring, people cited everything from having kids to simply being overwhelmed by the sheer amount of music out there.

If that wasn’t depressing enough, 60 per of the people questioned said that they felt stuck in a musical rut, only listening to artists they already know.

The populations of Wales and the North West of England are the ones really letting the side down – apparently the former give up on finding new music at 24 years and eight months, while the latter lose interest at 23 years and nine months.

But hats off to Scottish music fans who come out on top in the survey, resisting “musical paralysis” until the age of 40 years and seven months on average.

Unfortunately, the people behind the survey don’t offer a cure for this mysterious condition beyond listening to Deezer. But may we suggest checking out Classic Rock’s tracks of the week, listening to the Metal Hammer and Prog Podcasts or simply heading out to your nearest music venue to see what’s on offer.