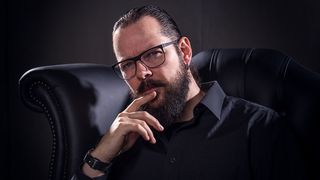 Ihsahn breaks with convention when he releases the first of two five-track EPs in February. Telemark will be released through Candlelight Records on February 14. Both EPs are set to represents both sides of the Norwegian's musical style in a manner similar to Opeth's Deliverence and Damnation albums.

“Having released full-length records nearly every second year since I was 16, I felt it might be time to try something else,” he tells Prog. “Also, I wanted to approach what I do in a way that felt natural but also to try to adapt it to the way that music is now performed and experienced.

"I have seven solo albums out now, so the first EP is like a small recap, in a way. I did touch on some of the same thematics with Arktis but this time it’s closer to home, both musically and, dare I say, culturally.”

Telemark represents the heavier side of Ihsahn's music, while the companion EP will show his more progressive side.

"The plan is to then follow up this EP with its aesthetic and musical counterpart, wherein I can distil all those more progressive, experimental and mellow elements of my music. Ultimately, it’s all a means for me to get some of those ideas out of my system, giving myself space before I delve into the next album!”

“The title of the EP is Telemark – it’s the county I grew up in and still live in, so the whole thing is situated there and very much inspired by that. So you could say it’s a roots-orientated album. I decided early on that I wanted this to be very purely related to black metal aesthetics.

"I wanted to distil the basic, bare bones black metal influences of my musical roots, given the overall concept, writing something for and from Telemark. I decided to do Norwegian lyrics for the first time, too. It feels very much closer to home in many ways.”