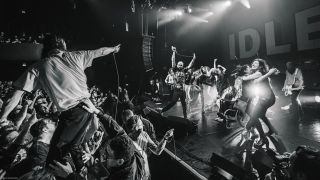 Idles have announced that they’ll release a live album later this year.

Titled A Beautiful Thing: Idles Live At Le Bataclan, it was filmed in Paris on December 3, 2018, and celebrates the band’s success over the last few years and includes tracks from Brutalism and Joy As An Act Of Resistance.

It’ll launch on CD, on digital and streaming platforms and on a variety of coloured vinyl packages on December 6 through Partisan Records.

Vocalist Joe Talbot says: Our show at Bataclan was the end of a very long journey for us. On that tour we learned so much about ourselves, each other and the audiences we have grown with over the past 10 years.

“That show was nothing short of catharsis and nothing more than love.

“We love what we do and the people who have carried us here, there was no hiding that at Bataclan and we are so very grateful that the moment was captured in all its glory, love and fatigue. Long live the open-minded and long live the moment.”

A Beautiful Thing: Idles Live At Le Bataclan will be presented in deluxe gatefold package and will include a booklet designed by Talbot featuring photographs from the show along with a selection of poetry.

To mark the news, Idles have released a video of their performance of Mother from the show, which can be watched below.

Idles will head back out on the road across the UK in early December.

A Beautiful Thing: Idles Live At Le Bataclan
Idles' first-ever live release will launch in December. It was recorded at the Paris venue at the end of 2018 and highlights tracks from the band's Brutalism and Joy As An Act Of Resistance albums.View Deal