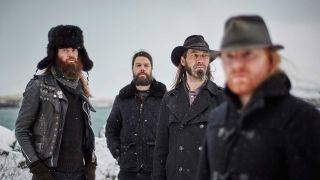 Icelandic band Sólstafir have released a video for Bláfjall, taken from 2017's well-received Berdreyminn album. The film, an epic drama that clocks in at more than 12 minutes, is a story of tenderness and trauma set against the bleak beauty of the Icelandic landscape.

“Here it is, our third video by the almighty Bowen Staines," says guitarist/singer Aðalbjörn "Addi" Tryggvason. "After we did our last video with Bowen, Lágnætti, we talked about for years to make another video together. As usual, adventures are like magnets when we join up forces, and this one was no different.

"We are super proud of the result, and yet again, Bowen shows that he is the master of this game. Enjoy Bláfjall.”

In 2017, Addi told Terrorizor, "The meaning of Bláfjall is blue – as in a black, black mountain, and it revolves around man’s battle against his own mind and those inner demons that often lead to self-destruction and harming one’s loved ones.

“I have myself struggled with alcoholism and it remains a never-ending battle and continuously walking further up a mountain in foggy darkness.

“But this is also about hope, because there is a way out, but you have to grab that rope when it comes swinging towards you and hold on to it as tight as you can.

“Everybody can end up lost on the black mountain, or Bláfjall in this case.”