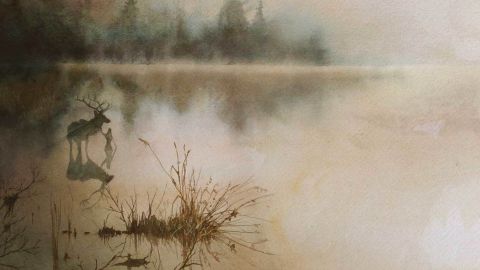 The increasing prevalence of former black metal bands in the modern prog scene is one of the more unexpected developments in the genre’s long and illustrious history. In its original, undiluted form, black metal was the polar opposite of what prog traditionally stands for – dark, insular, raw, wilfully primitive and deliberately antagonistic. But as those bands grew musically and personally, many of them ditched the shock tactics of the past and began to mutate into something new and strange. Witness former Emperor frontman Ihsahn’s art metal solo excursions or Enslaved’s inter-dimensional Viking prog.

You can add Sólstafir to that ever-growing list. Over the last 20 years, the Icelandic band have drifted away from their black metal roots and towards a forward-looking sound that taps deep into the myths and landscapes of their home country. The result is an approach that’s utterly unique, even in that gloriously indistinct hinterland that exists between prog and metal.

The band’s sixth album, Berdreyminn – the title sounds, aptly enough, like ‘beardymen’, though it roughly translates as ‘prophetic visionary’ – sees them venturing into the virgin snow yet again. If its predecessor, Ottá, took a folkier approach with its banjo and various obscure stringed instruments, Berdreyminn is both more direct and more expansive. There’s little in the way of traditional progressive rock to be found, but the likes of Ísafold and Hula (all titles and lyrics are in Icelandic, adding a layer of enigma) most definitely channel the spirit. There’s certainly nothing so conventional as a verse-chorus-verse structure here. Instead, it builds and undulates like the Icelandic landscape, occasionally erupting in the kind of volcanic explosion of noise that stops transatlantic flights.

Disparate influences abound. Opener Silfur-Refur nods to both the spacious, menacing undercurrent of 80s post-punk and Ennio Morricone’s spaghetti westerns. Hvit Saeng, meanwhile, could easily be a tear-jerking country ballad left out overnight in sub-zero temperatures, then brought in and left to partially defrost. But mostly, Berdreyminn is the equivalent an open-topped car journey around Iceland itself. One moment you’re confronted by a vast, sparkling ice sheet, the next there’s a monumental mountain looming towards you, the next a deep and frozen fjord. It’s the soundtrack to the greatest natural geography documentary you’ve never seen.

Like fellow Icelanders Sigur Rós, Sólstafir have created their own world and populated it with striking, singular features. Their black metal heart may have stopped beating long ago. But what has replaced it is way more interesting.