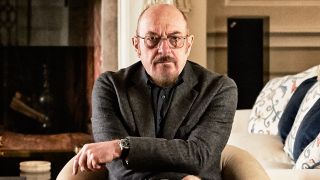 Ian Anderson has revealed that work is underway on his next solo album – and that it could be part electric and part acoustic.

“The idea is that there will be 12 new tracks, and the intention is that seven of them are full band rock numbers, and the other five are things I intend to record alone with just an acoustic guitar and voice,” Anderson tells Prog in an exclusive interview. “I like the variety and dynamic extremes of doing very spartan acoustic things alongside things with full band members.”

Anderson began writing new material for the follow-up to 2014’s Homo Erraticus before Jethro Tull’s 50th anniversary tour, but put his plans on ice to focus on that. “I thought I’d rather just put it on the back burner and not think about it until I can press the ‘go’ button properly again,” he says.

Anderson is cagey about specific details. “Until it’s got to the stage where I’m doing artwork, or maybe even the point of release, it’s best to keep schtum. The minute you start talking about song titles or album titles or lyrical themes, you’re tying your hands behind you back. At this stage, nothing is set in stone.”

That isn’t stopping him toying with the notion of releasing the album in a different way – or perhaps not even releasing it as an album at all. “Part of me thinks, ‘Wouldn’t it be nice to do three EPs, each of them four or five months apart? Wouldn’t that be satisfying for the fans more than me?” he says. “Having said all of that, this could be a rubbish album and never get released, because I’m getting a bit old and constantly reminded that I only have a little while ahead of me and should probably spend that time doing live shows.”

There is no scheduled release date for Anderson’s new album. A new official oral history of his former band, The Ballad of Jethro Tull, will be published in the Autumn of 2019.

You can read Anderson and former Tull guitarist Martin Barre’s in-depth recollections of making Stand Up in the new issue of Prog magazine. You can buy the issue online here. Or use our store finder to find your nearest stockist.