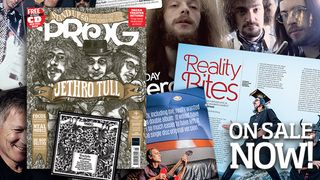 The new issue of Prog is on sale today. We celebrate 50 years of Stand Up with Ian Anderson, Martin Barre and album cover artist james Grashow. The album that saw the band break away from the blues and jazz of their debut and begin to explore more progressive territory. It worked too, because Stand Up was the band's very first Number One album.

Dream Theater - the prog metal titans explain how they resurrected their career following the overly ambitious The Astonishing.

The Neal Morse Band - they're back with another expansive double concept album, The Great Adventure.

Greenslade - a prog band with two keyboard players and no guitarist tell how they made it.

Michael Rother - on a career that's taken in Kraftwerk, NEU!, Harmonia and a celebrated solo career.

The Windmill - it's a classic prog rock sound made by these six colourful Norwegians.

Kingcrow - guitarist Diego Caffola gives us a glimpse of his prog world.

Fernando Perdomo - the US prog guitarist reveals his inspirations.

And music from Susanna, Evership, The Paradox Twin, Quantum Pig and more on the free CD.