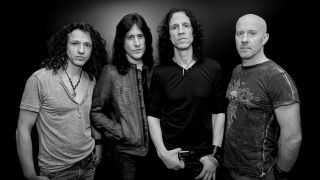 Hurtsmile have released a video for their track Hello I Must Be Going.

The song is taken from the band’s 2014 album Retrogrenade. The band are fronted by former Van Halen and current Extreme singer Gary Cherone, who says the video for Hello I Must Be Going is inspired by a Marx Brothers song that featured in 1930 film Animal Crackers.

He adds: “I can’t remember the last time I had this much fun making a video. We didn’t take ourselves too seriously, it almost turned into a blooper reel. I think it captures the spirit of the song.”

The band say a video for the track Good Bye will also be released this week.