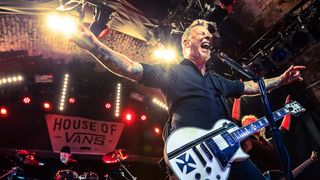 House Of Vans have announced plans to stream Metallica's performance at their intimate London venue, where the band celebrated the release of Hardwired... To Self-Destruct in 2016.

The stream will be hosted on the House Of Vans site at 8pm EDT on May 4/1am BST on May 5. The performance will then be available to watch at the same location for a week following the premiere.

Originally filmed on November 18, 2016, the band headed to the 600-capacity venue to mark the launch of Hardwired... with a 15-song set mixing classic Metallica tracks and cover versions, with three songs taken from the new album.

Opening with their cover of Budgie’s Breadfan, the band tore through a setlist that spanned their 30-plus year career, from Kill ’Em All classic The Four Horsemen right up to new songs Atlas, Rise!, Moth Into Flame and Hardwired – meaning there'll be something in there for any and all Metallica fans.

Check out the full setlist below.