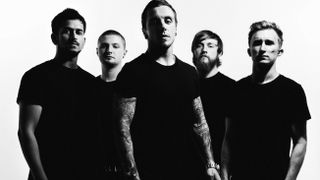 Heart Of A Coward

Heart Of A Coward have confirmed that vocalist Jamie Graham has parted ways with the band.

He says he’s leaving “with a heavy heart” with the group reporting he’s taken the decision to “focus on his work and spend more time with his family.”

Heart Of A Coward say in a statement: “We know that we have been quiet for the past few months, but unfortunately we have to break our silence with some bad news.

“We must announce the departure of our vocalist Jamie Graham. We know that it wasn’t an easy decision for him to make but we respect his decision and support his choice to focus on his work and spend more time with his family.”

Graham thanks fans for their support and says the band will “bounce back even stronger” and adds: “After three albums and six years of touring, this has been an incredibly hard decision to make.

“I can look back fondly on tours with Machine Head, Trivium, Thy Art Is Murder, and many many others with huge pride as well as festival performances I never thought I’d find myself doing.

“Some of the best times of my life have been on the road with Heart Of A Coward. I wish Nodz, V, Carl and Steve all the best.”

The band say they will continue on and are currently working on the follow-up to 2015’s Deliverance. They asked those interested in replacing Graham to contact them directly.