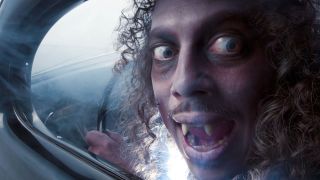 Hammett says: “I’m super stoked to announce the man, the myth, the legend, Slash, will be joining us at Fear FestEvil.

“We’re proud to announce our first panel participant and murder mystery cast member: Slipknot and Stone Sour’s Corey Taylor will be on hand for the Winchester House and RockBar FestEvities.

“And John 5 is on board – the former Marilyn Manson and current Rob Zombie guitarist extraordinaire John 5 will join us as a panel participant.”

The three are added to a lineup that features Meshuggah, High On Fire, Orchid, Blues Pills, Agnostic Front and Asada Messiah.

The weekend kicks off with a murder mystery dinner and VIP party at the Winchester Mystery House before shifting to the RockBar Theater on Saturday for two days of live music and a display of Kirk’s Crypt, the guitarist’s collection of horror memorabilia.

Hammett and Metallica recently shared a photo from the recording sessions for the follow-up to 2008’s Death Magnetic. Former producer Bob Rock recently said he believes the band are likely to be making a landmark album.