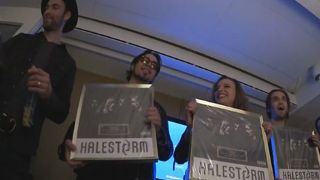 Halestorm were presented with the first gold record of their career on March 20 in Sweden for their single I Miss The Misery.

They were handed the prize for the track taken from from 2012 album The Strange Case Of… as they prepared for their March 21 show in Stockholm.

I Miss The Misery followed the lead single Love Bites (So Do I), which earned the group a Grammy Award in the Best Hard Rock/Metal Performance category.

The news is the result of The International Federation of the Phonographic Industry (IFPI) in Sweden changing its charts to include on-demand audio and/or video song streams, which are now also counted towards the threshold required for gold and platinum certifications.

Halestorm made US chart history this past week as the first female-fronted band to top the US Active Rock Chart with singles from consecutive albums.

Apocalyptic – the lead track from their upcoming album Into The Wild Life – hit No. 1 this week, repeating the chart success of Freak like Me, the third single from The Strange Case Of…

Following a 10-date UK tour earlier this month, Halestorm are currently playing dates across Europe in advance of the April 13 UK release of their third album.

The group are also the subject of photographer Rob Fenn’s To Hale And Back, a photo book documenting the band’s career to date; the project is due in May.