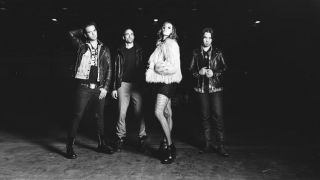 Halestorm have teamed up with photographer Rob Fenn for To Hale And Back, a photo book documenting the band’s career to date.

Due in May, the project presents a collection of images that tell the story of the American group’s rise to superstardom.

Since 2012, Fenn has travelled the world with Halestorm and captured them during their most intimate, most vulnerable and their most triumphant moments – backstage, on stage, on the road and in the studio.

Lzzy Hale says: “Dearest Freaks, Lzzbians and Storm Chasers around the world – it’s because of music I exist, and it’s music that has brought us all together. Thank you for being my enablers. I have this wonderful journey that I’m on, because of you.

“Here’s a collection of the moments we’ve shared. Hope you enjoy. Rock Forward.”

Available at robfenn.com, To Hale And Back will be published a month after Halestorm release their third album, Into The Wild Life, on April 6 in the UK via Atlantic Records.

The follow-up to 2012’s The Strange Case Of… was recorded in Nashville as a performance-based record with songs captured as close to live as possible.

Halestorm have issued three songs from the project to date, including Apocalyptic, Mayhem and Amen.

This weekend, the group completed a 10-date UK tour where they performed songs from the album, including the debut of I Am The Fire at their March 9 show in Wolverhampton.