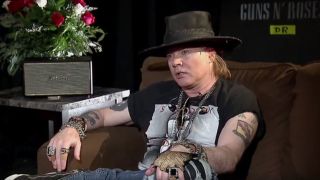 Guns N’ Roses frontman Axl Rose has recalled how he asked for Slash’s phone number as reunion discussions began to go serious – and his manager Fernando Lebeis accused him of joking.

The singer and guitarist hadn’t spoken in years after the band lineup disintegrated in the 1990s, with Rose having responded to questions about reuniting by saying: “Not in this lifetime.”

Rose tells Globo.com: “It had a lot to do with Paul. He started talking about it, it seemed real, so at that point I told my people that they could go ahead and start talking, see what’s going on.

“As it became more real I texted Fernando and asked for Slash’s number. Fernando texted: ‘If this is a joke… I’m going to kill you!’”

The pair finally got together after having to change their initial plans. “I called him and he was on tour or something,” says Rose. “We set up when we were going to see each other. Something happened with both of our plans and that didn’t happen.

“Eventually in October we got together, we had a dinner at my house, then Duff and I went and hung out just after. Then it was just like talking and planning.

“Initially we were going to do some promos and stuff, then other things came up that got in the way. Then when I went down to rehearsals, everything sounded right and we just went to work. It was all working.”

Guns N’ Roses are thought to be planning more shows on their Not In This Lifetime tour, beyond those confirmed into February next year. But Rose says he’s unsure whether classic-era members Steven Adler and Izzy Stradlin will take part, even though drummer Adler has made three guest appearances.

“I have no idea,” the singer reports. “When this started Steven has just had back surgery and stuff. I don’t have any idea about that.

“With Izzy, that’s just something I can’t really describe. I don’t know what to say. You can have a conversation and think it’s one way, then the next day it’s another way. I’m not trying to take any shots at Izzy. It’s just, his thing’s his thing, whatever that is.”

Rose is currently back with AC/DC for 10 shows this month, and he’s repeated that he’ll continue to work with the Aussie giants for as long as they want him. “I love that it’s my job, I love that Angus is my boss,” he says.

“Singing the early Brian Johnson songs, it’s like, those are something else to sing. Physically it’s a different animal than any other kind of work. I’ve had pride in doing it, and it’s a hard thing. It’s whatever Angus wants to do.”

Reflecting on the broken foot that saw him delivering shows with both Guns N’ Roses and AC/DC from Dave Grohl’s stage throne, Rose says: “My sister had just broken her leg a few months before and she’d made this comment, ‘When you break something, you know.’ All of a sudden, on stage, I was like, ‘She was right – you know.’”

Guns N’ Roses Not In This Lifetime tour dates