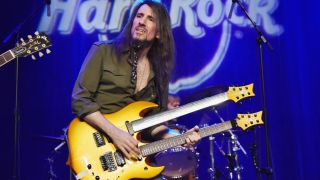 The guitarist says he underwent immediate surgery to remove two tumours from his bladder, after he showed doctors a “pee video” of his problem to push for further examination when they dismissed his concerns.

Bumblefoot tells Loudwire: “I would go to different doctors and I would say, ‘This ain’t normal.’ They’d say, ‘Oh you’re just getting older, it’s your prostate.’ I’ve never heard of anyone hitting 40 and pissing blood. Everyone just kept writing me off.”

He adds: “I made a video to show the doctors what was going on. I kept the video as a reminder to not let things go. I’m glad I did.”

Bumblefoot says that he’ll need re-checks every three months over the next two years due to the likelihood of cancer recurrence. He also notes that there are nodules on both of his lungs which are “too small to crack the chest open for,” and doctors will have to monitor them – but he insists “all is fine.”

He continues: “It’s how you take care of yourself that makes a big difference on how these things will hit you. I try really hard to be happy. There are worse things out there.

“I’m happy to be making music, to be doing what I set out to do 40 years ago with great people, for great people.

“It doesn’t matter if you’re sick or well, as long as you’re happy and living well, that’s all that matters.”

Bumblefoot’s supergroup project Art Of Anarchy will launch a single next month, followed by an album next year.

Ron “Bumblefoot” Thal – The 10 Records That Changed My Life