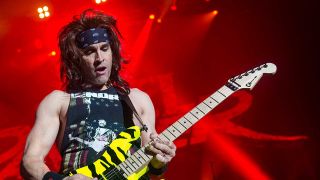 “Everybody responds to music in different ways, and everybody likes different guitarists for their own reasons,” says Satchel (real name: Russ Parrish), guitarist for the L.A-based glam-metal stars Steel Panther. “What I always ask myself is simply, ‘Do I want to listen to this?’ If there’s a lot of great guitar playing on a record that I don’t want to hear, what’s the point?”

Satchel reasons that great technique goes over listener’s heads when it sounds like the guitarist is working too hard. “Keep it simple,” he stresses. “Your playing shouldn’t sound like complicated; otherwise it sounds like I’m listening to a math equation. Riffs and solos should sound effortless, like the guy is just playing them. And you should definitely be able to hum them – that’s a must. Pull yourself out of the ‘guitar player’ mode and think like a listener. The best stuff is usually the simplest.”

“Ritchie Blackmore has always been one of my favourite guitar players, and this might be Deep Purple’s best album overall. Ritchie’s rhythm playing is just as tasty and original as his lead work. A lot of people overlook what a cool, in-the-pocket rhythm player he is. The guy has it all.

“Blackmore’s one of finest Strat players of all time. His tone is unbelievable. He’s something of a pioneer, too – he was doing stuff with the whammy bar before Floyd Roses were on the market. His choice of notes kills me. Every time he plays a lead, there’s a wonderful improvisational quality to what he’s doing, but I would imagine he worked it all out pretty meticulously. Still, to play a memorable, classic solo and sound like it’s just coming from the top of your head – that’s talent.

“If you’re a kid and have never heard this record, check it out. It’s just as inspiring now as it was 40-odd years ago.”

“This changed everything – for me and for everybody. What amazes me still is the economy of the sound and the minimalism of the arrangements. As incredible as Eddie’s playing is, he doesn’t pile on all kinds of needless stuff. It all sounds like one guitar performance throughout. Nothing is doubled or tripled. If you listen to this record on headphones, there’s one guitar and it’s only on one side, and it still sounds massive.

“There’s such a natural quality to it all. Like the Machine Head album, it sounds like Eddie is just winging it, playing whatever comes to him. But you know that’s not the case – the band played these songs live all over L.A. clubs, so they obviously had this stuff down cold. The whole thing is pretty magical.”

“A lot of people don’t know about Blue Oyster Cult these days, even though the band had some hits. One of my favourite players is Buck Dharma. He’s an amazing rock guitarist – and totally underrated in my opinion. He’s so tasty, especially the way he uses delay pedals.

“Hardcore BOC fans tend to like the band’s earlier, weirder stuff more; they think the commercial stuff isn’t as good. I kind of like it all. There’s some really big radio songs on this record, like Burnin’ For You. Veteran of the Psychic Wars is another great one. Lots of hot solos and riffs. Check this one out.”

“Mick Ronson is another one of my favorite guitar players. He’s sort of underrated, too, which is strange because he embodied rock guitar in everything he did. And, of course, Bowie was one of a kind. You almost can’t separate the two guys for how they influenced and worked with each other.

“This is a record that I want to listen to over and over. All of Bowie’s stuff was like that, but especially this one. The guitar playing fit each song like a glove. You should be able to sing the riffs and melodies, and Mick Ronson’s guitar work is absolutely sing-able. You don’t even need the lyrics to know what the songs are.”

“I’m heavy metal, man, and this is one of the best metal albums ever. Every song is great, and the guitar playing is awesome. You can’t pick out a note that doesn’t fit the song. You’ve got two guitarists, Adrian Smith and Dave Murray, and they’re like the ultimate twin-guitar team. They complement each other so well.

“If you’re into hard rock and heavy metal, this is a record you have to spend some time with. The guitar playing is deceptively simple, but there’s a lot of thought behind it. Dave and Adrian sometimes pull out a few repetitive licks, but they change them up every so slightly throughout the songs. It’s not too complicated, but it’s smart.

“I went through different periods where I was partial to each guy. Dave Murray would use his neck pickup a lot, and I tried to emulate that sound. But then I’d also go for Adrian’s more aggressive use of the bridge pickups. That’s why they fit together so well. They’re different, but they’re team players. Pretty inspiring stuff.”