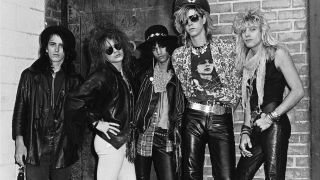 In January it was announced that Axl Rose, Slash and Duff McKagan would appear together onstage again at two Las Vegas shows and a pair of Mexico City concerts in-between headline appearances at Coachella later in the month.

And last month, former GNR manager Alan Niven reported McKagan and original guitarist Stradlin had been working together in the studio – leading to rumours that he’d be part of the reunion lineup.

But with speculation mounting at his possible involvement, Stradlin opened a Twitter account to address the rumours head-on.

He tells Rolling Stone: “At this point in time, I will not be playing at any of the April 2016 GNR shows. I’ve also not been in the studio recording or writing with any of the others recently. There is so much speculation, but so very little info, that I thought I should reach out.

He continues: “There’s so much misinformation, so I wanted to clarify that I’m not in the studio recording with any of the Guns N’ Roses guys. At this point in time, I’m not involved in the actual shows. A lot of stuff fans are reading isn’t true.”

Guns N’ Roses are the cover stars of issue 221 of Classic Rock magazine – out now in print, digital and TeamRock+.