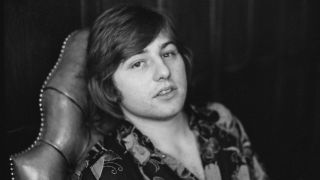 Carl Palmer has led the tributes to his former Emerson, Lake & Palmer bandmate Greg Lake, who has died at the age of 69.

It was confirmed today by long-time ELP manager Stewart Young that Lake passed away yesterday after “a long and stubborn battle with cancer.”

Now Emerson, Lake & Palmer drummer Palmer – the last surviving member of ELP following Lake’s passing and the tragic death earlier this year of Keith Emerson – has released a statement in memory of his friend and bandmate.

Palmer says: “It is with great sadness that I must now say goodbye to my friend and fellow band-mate, Greg Lake. Greg’s soaring voice and skill as a musician will be remembered by all who knew his music and recordings he made with ELP and King Crimson.

“I have fond memories of those great years we had in the 1970s and many memorable shows we performed together.

“Having lost Keith this year as well, has made this particularly hard for all of us. As Greg sang at the end of Pictures At An Exhibition, ‘Death is life.’

“His music can now live forever in the hearts of all who loved him.”

Other artists form the world of prog and the wider rock and entertainment community have also paid tribute.

John Wetton described Lake as “a musical giant in my genre,” while Yes say: “Very sad to hear of the passing of our friend, the legendary Greg Lake. Our thoughts and condolences are with Regina, Natasha and all the family.”

And Rick Wakeman adds: “Another sad loss with the passing of Greg Lake. You left some great music with us my friend and so, like Keith, you will live on.”

Prog magazine editor Jerry Ewing points to Lake’s skills as a producer as well as his “rare” musical ability in his own tribute.

Ewing says: “Greg Lake was one of those rare rock musicians who, like his fellow ELP compatriots, understood and enjoyed bombastic prodigiousness in music, but was also a sensitive songwriter who was equally aware of the value of a great pop song.

“He was also a skilled producer, and let us not forget his ground-breaking work in King Crimson as well.

“His passing is immeasurably sad in a year already shrouded in black when it comes to deaths in the rock world.”

Some of the tributes on social media have called for fans to buy Lake’s classic Christmas song I Believe In Father Christmas to get it to the top of the singles charts at Christmas.

Many of the tributes made on social media can be read below.

The Emerson, Lake & Palmer Quiz: how well do you know this iconic prog trio?