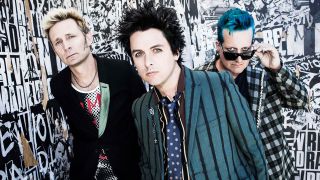 Green Day have become the latest artist to hook up with Reverb.com to sell a bunch of their gear.

Black Sabbath drummer Bill Ward and Foo Fighters’ guitarist Chris Shiflett previously teamed up with the company to sell some of their items – and the Green Day online store will open on February 7.

The collection will feature more than 100 items, with a statement saying: “When the shop launches you’ll be able to buy a guitar used on Dookie, speaker cabinets still marked from the mud-fight at Woodstock ‘94, drum kits that have toured the world – and some remnants that have been set ablaze – vintage bass amps, and recording gear.”

Fans are asked to register on the Reverb site for further information.

Green Day drummer Tré Cool says: “I’m a crazy cat person hoarder. I can hardly see out the front of my car, it’s full of newspapers. It’s a real problem. So you hoard the right shit long enough, they call you a collector.

“I’m selling off just a wee bit of the collection – just a selected few items. I’m not doing them any justice sitting around when somebody could be using this stuff and enjoying it.

“I haven’t really sold anything ever – my psychiatrist said I have to do this!’

Speaking about his guitar collection, frontman Billie Joe Armstrong adds: “After 30 years of collecting odds and ends and really good stuff, what ended up happening is I got too many, so I was like, ‘We gotta sell some of this off!’

“Some of it I’ve used, and some of it just sat there in pristine condition."

Check out the pair talking about the sale in the video below.