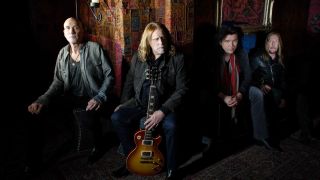 Gov’t Mule have premiered their version of Rolling Stones track Can’t You Hear Me Knocking with TeamRock.

It’s taken from Stoned Side Of The Mule, recorded live in Philadelphia in 2009. Band leader Warren Haynes has embarked on a series of concert releases aimed at proving his outfit’s versatility.

He recently said: “Each song on our 2013 album Shout! has its own personality – it sounds like Gov’t Mule but doesn’t sound like anything we’d ever done. These archive releases further that concept. They allow us to highlight some of our influences as well as how far we’ve come since the first album.”

The latest title follows the group’s Dark Side Of The Mule, Dub Side Of The Mule and Sco’Mule, featuring the band’s takes on Pink Floyd, reggae and their collaboration with John Scofield respectively.

Stoned Side Of The Mule is released on April 20 via Provogue in limited-edition vinyl only. It’s available for pre-order now. The band play London’s Shepherds Bush Empire on May 25.

A1. Under My Thumb

A4. Paint It Black

D2. Can’t You Hear Me Knocking