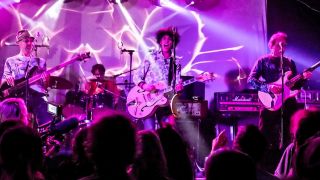 Gong have confirmed they’re to record a follow-up to 2014’s I See You – their last release before the death of founder Daevid Allen.

The band say: “Gong are pleased to announce they have signed a deal with Madfish. Friends from across the Gong Universe are being invited along for the ride.”

Meanwhile, they’ve distanced themselves from a recently-announced relaunch of the 1970s Radio Gnome Invisible Trilogy.

They say: “We do not endorse the BYG/Charly Records release. We stand firmly alongside earlier band members in asking that you, the fans, only purchase releases that have been approved by Gong musicians.”

They tour the UK later this month:

Gong 2015 are ‘exactly what Daevid wanted’