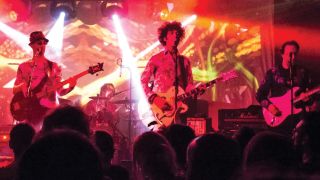 Gong frontman Kavus Torabi is certain the 2015 version of the band are exactly what late founder Daevid Allen wanted them to be.

He died of cancer in March – but not before hearing the results of their first work without him, and wishing them all the success they could imagine.

Gong last week confirmed a UK tour which marks the beginning of a new chapter for the iconic outfit, which Torabi admitted he hadn’t been certain about.

The frontman – who debuted on 2014 album I See You – tells Prog: “I’ve agreed to do a couple things in the past that I didn’t feel 100% about, and very quickly regretted it. So I didn’t want to make that mistake again.

“We had a 42-date tour booked to promote I See You, and once promoted heard Daevid wouldn’t be performing, most of the gigs got pulled. We agreed to honour those dates, and I said I’d be happy to sing, but I couldn’t see a future for it beyond that.

“Then a funny thing happened – we started rehearsing the stuff and it sounded amazing.

“I’ve been a Gong fan since my teens and I’d never go through with anything I thought sounded bogus or half-arsed. The gigs were wild, far beyond what any of us had expected. After the first couple of dates we knew we had something incredibly special.

“Any fears that this might be some sort of tribute act were completely put to sleep once we started playing.”

And Torabi is happy that the latest incarnation, which also features Ian East, Dave Sturt, Cheb Nettles and Fabio Golfetti, isn’t like any previous version. “That’s exactly what Daevid wanted,” he states.

After their initial doubts the band are determined to continue. “His passing, if anything, has strengthened our resolve,” he says. “There’s bound to be a ‘No David, no Gong’ contingent. I understand that completely. I never expected or particularly desired to front Gong – but it sounds so good it would be stupid not to continue.

“It’s an honour to play this stuff. Daevid trusted us with it and it sounds wonderful. If anyone has a problem with that then that’s their trip, not ours.”

Asked about the band’s watchwords for the future, Torabi replies: “I think hope and fear are two of the biggest nuisances anyone can get themselves wrapped up in, because neither exist as a thing – they’re just a psychological tripwire.

“Daevid has trusted us with Gong, and we’re going to go with our instinct and let his beautiful spectral hand guide us.

“It will be whatever it is. No expectations.”

Tour tickets are on sale now.

Oct 24: Manchester Band On The Wall