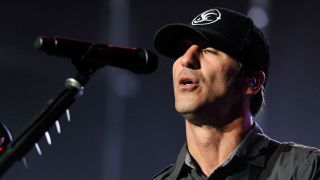 Godsmack frontman Sully Erna says he hopes to break into the acting world after filming a pilot for a new TV show.

The singer worked with cast members of hit series Sons Of Anarchy on the unnamed pilot and already has a number of movie roles lined up for next year.

Erna was first “bitten by the acting bug” in 2003 when he worked with The Rock and Kelly Hu on the video for Godsmack’s hit I Stand Alone.

He tells The Rock Revival: “I remember thinking I was gonna be really nervous and uncomfortable, and I surprisingly found myself very comfortable working out these scenes with these people that I thought would be a little bit more intimidating.

“And from that point on I started just exploring the acting world and I started doing classes with a lady named Susan Batson, who’s a really top-notch acting coach — she does Tom Cruise and Nicole Kidman.

“From there, I started getting a little bit more involved in it, and I started landing small roles — like on Dirt with Courteney Cox — and I just recently did a role in a new Martin Scorsese movie called Bleed For This — small part as a blackjack dealer that I have a scene with the main guy in the movie, Miles Teller.

“And I just finished shooting a pilot for a new TV series with a bunch of the cast from Sons Of Anarchy — David Labrava, who plays Happy, and Drea de Matteo.

“So between that and a couple of films that I’m supposed to be doing next year, I’m just trying to continue to get some momentum in TV and film, because I really enjoy it as well. It’s a really fun thing. And I’m just working my way up that ladder at this point.”

Erna also talked about his solo work, saying he will eventually release a follow-up to 2010’s Avalon.

He adds: “It’s just a matter of when I feel like I have the right batch of songs to put on an album. Because that’s really important to me, especially with the solo stuff. This is the kind of music that’s more personal to me.