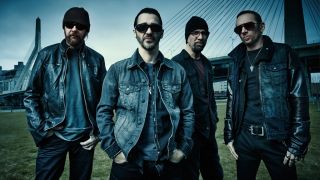 After three US No.1 albums on the bounce (starting with 2003’s Faceless) and several sold-out arena tours, a frazzled Godsmack risked career suicide by taking a much-needed break at the end of 2012. They needn’t have worried, as their new album, 1000hp, reached the US Top 3

Why was it four years between your last two albums?

We took a long break because we were burnt out from fifteen years on the road. We wanted to lay low and clear our heads. I did a solo project, the guys did some side projects, and there were questions on whether we would return.

How did you get to that point?

Balance is important, and before we didn’t understand that concept. We were working, album after album after album, without breaks. We felt we needed to constantly feed the career. You need to know when to take a break without feeling like you’ll take a year off and lose your fanbase. Taking a break wasn’t an option – it was a demand. We didn’t care what the consequences were, we were in a critical condition and needed to heal.

Was it easy to slip back into the recording process again?

Recording can be tiring, tedious and annoying. I relate it to getting tattoos. When I was younger I could sit and get a tattoo for eight hours and it was fine. Now everything hurts! It’s the same with recording. You love music and creating from nothing, but when the songs are written you can hear them in your head a certain way, and having to replicate that can be really challenging and frustrating.

1000hp is a high-energy record. It certainly doesn’t sound like a band that’s dead on its feet.

We got our legs back. We’re back in a good emotional and physical place – and the album is a clear result of that.The band was so keen to work together again and there was so much energy in the room.

You play huge arenas in the US, but clubs in Europe. Is that frustrating?

We had a lot of record-label complications in the past. We had no support, press or photographers over there [Europe] and we were very frustrated. You need to have the right label and team in place. And now we have that. We can’t imagine that people in Europe would not like this band. Bands like Slipknot and Foo Fighters do really well out there, and you think, “Man, we should be doing the same kind of business.” When 2015 comes around we will hit Europe.

You upset Nikki Sixx with the song Cryin’ Like A Bitch on your last album, The Oracle. [Erna had previously complained that Godsmack were treated badly when they toured with Mötley Crüe in 2009.] Did that influence your writing this time?

No. [Sixx] thinks he’s above everyone else, and we come from a place where everyone is grounded. When someone starts pulling the rock-star attitude with us it doesn’t fly in our camp. So I put him in his place. There’s actually a better song on the new record that I think he’s going to find very disturbing [laughs].

1000hp is out now via Spinefarm Records