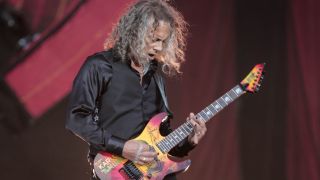 Metallica guitarist Kirk Hammett has described why his guitar solo on 1991 song The Unforgiven has such a timeless appeal for him.

The guitar work on the Black Album track was voted no.30 on Classic Rock’s 100 Greatest Guitar Solos by a panel of critics – with Led Zeppelin’s Jimmy Page clinching the top spot with his work on Stairway To Heaven.

Hammett tells Classic Rock: “I enjoy playing the solo on The Unforgiven because it’s such a dynamic solo. And a lot of times live, I’ll change around my guitar solo because I end up not liking what I recorded, or I get bored with what was recorded – or I just want to play something completely different.

“But with The Unforgiven, as a guitar solo it has changed very little over the years. It’s probably one of the only guitar solos that I play just like the album.”

The full list of the 100 Greatest Guitar Solos features in the new issue of Classic Rock magazine, which is in-store on Saturday and available via TeamRock+ now.

Hammett is one of the guest stars lined up for next month’s Classic Rock Roll Of Honour being held in Tokyo.

Metallica: the epic story behind the Black album