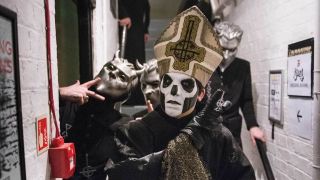 We love a bit of mystery chez Hammer, and frankly something in the world of metal has been intriguing us for some time now. Five years, three albums and countless exceptional live shows down the line and we remain uncertain of the true identities of Sweden’s premier exponents of arcane, blues-fuelled, Satanic cabaret, Ghost. So, with our suspicions growing and a sold-out headlining show at London’s historic KOKO ahead of us, we decided to accept the invitation of a backstage pass to one of the most privately shrouded cults in music to dig around and answer the question: just who are Ghost? And what do they want?

We arrive at the venue. Already there is a fairly substantial queue stretching around the corner, two whole hours before doors are even due to open. Heading to the front we meet Chelsea, Kat, Catherine and Claudia who have been here since one o’clock in the afternoon, with the exception of Catherine who was here, amazingly, at 10am! Why so early?! “We show the same dedication to them that they show to us,” Catherine says, matter-of-factly.

“Music had all got a bit samey,” Chelsea tells us, “then Ghost came along and we had something that we just love.”

“And they’ve brought people together!” chimes in Kat. “I wouldn’t have met Chelsea if it wasn’t for Ghost and she’s one of my best friends now.”

You couldn’t meet more hardcore fans if you tried, so unsurprisingly they aren’t keen on giving the game away. “I know who they are, but I’m not telling,” says Catherine, before stuttering, “Well… I think I know who they are.” The element of doubt there, folks!

We wander to the back entrance of the venue and await the arrival of our pass. Various different members of The Clergy (aka Ghost’s crew) open the door and take a look at us, before disappearing, leaving us alone in the cold. Finally, a hand appears, and an AAA laminate is thrust at us and we are ushered hurriedly into KOKO. The game is afoot!

Having been shown to the green room next to the stage we sit and wait. There is literally no one here. Peeking around the many winding corridors of the backstage area there is not a soul to be seen and the only sound is the echo of our own footsteps… seriously, this is freaking us out a bit now! Where is everybody?!

The unmistakable sound of Ghost rumbles through the backstage labyrinth. They’re onstage now, soundchecking! This could be our chance to see them in all their de-robed glory. We hot foot it to the front of the stage and… it’s empty save for a few roadies moving equipment back and forth. But the sound of their guitar still reverberates around the venue. Which is really fucking weird. Yeah! Really funny, guys; you’ve done your little tricks, now where the hell are you?!

As the stage is slowly cleared it’s apparent that we aren’t going to be getting our first glimpse of the members of Ghost just yet. But we do see support act Dead Soul readying themselves. We grab vocalist Anders Landelius to see what he can tell us about being on tour with such an unusual band. “Well, it’s odd because sometimes I walk through the crowd to sell t-shirts after the show and people clock me as being in a band… but they don’t really know from where. It’s good for me, because I get people looking at me, but it’s a special kind of thing that they can walk around the venue or around the city and people aren’t looking at them… because they just don’t know!” Anders laughs, before adding: “But, at every show, you can see the eyes twitching from the audience, wondering if the person that just walked past them is a member of Ghost. I think that makes for a really special atmosphere.”

With Anders off to soundcheck we grab the only other person we can see in the venue, merch man Jason. What’s it like working with the most mysterious band in rock? “Hmm… mysterious?” Jason raises an eyebrow as he considers our question. “I guess it’s mysterious! It’s been about three years I’ve been with them and they’re really great… but strange. You walk on the bus, see them in those fucking masks, you say, ‘Hey!’ They’re very polite and then they just walk off. I mean, it’s hard to talk to guys, if they are guys, that only ever wear those masks. I’m pretty sure they sleep in those damn things.” That ever freak you out? “Not after three years, nah,” he scoffs. “But those beady little eyes take some getting used to.” Sleeping in masks? Obviously.

With the doors due to be opened to the public imminently we venture to the backstage area where we are informed that Ghost are eating (what they’re eating is something Hammer aren’t privy to) and that we will be granted an audience with a Nameless Ghoul once their meal has been consumed. Being the impatient types we are, the Hammer Ghost-Hunting Crew (HGHC? Ah forget it) decide to have a little nose around for ourselves. And, without wanting to sound like a broken record, there’s no fucker about! The show is definitely tonight, right?!

Having basically given up and decided to sit waiting in our allotted green room, we bump into Dante Bonutto, head of Spinefarm Records and the man responsible for signing the band. Come on, Dante! You’re their boss! You must have some insider information, right? “We work with Ghost on a purely need-to-know basis,” he tells us with the upmost seriousness. “By and large we don’t get to see anything that the general public don’t also see. We just hope that, by working with the band, our souls aren’t fully committed to Satan… although, being that I work with Venom already, it might be too late for me.” Yeah, you’re screwed Dante, mate. Thanks for nothing!

All is still quiet in the green room save for Dead Soul’s haunting, 80s goth-tinged support set throbbing through the walls from out front. We sit and wait patiently, with only the odd member of The Clergy occasionally passing through for company. Each time our eyes light up in the hope that we’re about be taken to Ghost’s lair, they shake their head to convey that they’re far too busy. Bollocks.

We are beckoned forth by a member of The Clergy. Up the stairs we go, murmurs from a room above us piercing the silence. Finally! We are shown into a room and told to wait.

The door creeks and from behind it steps A Nameless Ghoul. Behind him we squint to see into the opposite room, where his bandmates are keeping sanctuary, to see robed figures strapping on guitars in preparation. It’s a split-second glimpse before the door is closed and we are sitting face-to-face, and alone, with exactly who we came to see. Well, almost. We’re still not officially allowed to talk to Papa himself.

We open by telling The Ghoul how impressed we are at their skills in deception. “Well, simple mathematics dictates that if there are 1,500 people at the show and only 50 or 60 outside the bus wanting to know who we are…” he says in a measured tone, “then maybe not everybody is that interested. We are in the business of giving people a show and a good, entertaining night. And what we get in return for that is seeing the smiles and the cheering and the euphoric feeling we strive to create.”

“If there are 40 people at the end of the night who want to have their records signed, that’s fine,” he continues. “As long as they don’t want to have their photos taken with us and respect the entity we have chosen to be, then there is no problem.” Surely the more sizeable you get, the harder it will be to pull this off, though? The shows are getting bigger and rampant online rumours suggest that the former Repugnant frontman is heavily involved, one Tobias Fo- “I hope we can pull it off,” the Ghoul smoothly cuts in. “At the moment this is only a fraction of what we want to do. This, tonight, is the biggest production we’ve ever brought over to this country, but I still think it’s too much of a rock show. The level of theatrics and visuals I plan to have in the future is not for the punk rock aficionados.”

“I love those shows,” he adds after a moment’s pause. “The sweat, the grit, I love that, but that is not what we do. The idea that we had, even in 2008, was for this band to become a musical act. Imagine Phantom Of The Opera: something you can be sucked into for two hours. I want a divine moment. I want us to be able to touch people in the way that religion used to in the past. I want people to leave our shows feeling euphoric, like they’ve been touched by the gods.”

We admire the Ghoul’s commitment, and he does seem to have a lot invested in Ghost for a simple servant of the clergy, but there’s no time to mull on that now: what does the Ghoul think of those fans who’ve been waiting since 10am to show the same level of commitment to the band as they feel they are being given from them? “That’s a beautiful thing to say, I’m so glad. I’m actually touched by that…” he says with - did we detect? - a slight quiver in his voice. Looking into A Nameless Ghoul’s eyes, through all of the mystique, theatre and sleight of hand, we can see them glazing over. Is he welling up? Ghost, it seems, are human after all.

We say our goodbyes and allow Ghost to congregate by the stage door as they ready to perform their latest sold-out sermon. There is a quiet confidence about them as they pace back and forth. No high fives, shots consumed or group hugs. Mötley Crüe circa 1984 this is not. We are ushered away and run to KOKO’s balcony.

As the lights dim and Ghost’s intro tape kicks in, the mass gathered inside KOKO erupt for the first of many times tonight. And over the next 105 minutes they stand transfixed by one of the most spellbinding shows in metal. From the grand entrance of Papa Emeritus III onwards it’s pure theatre, with comedy interludes, set switch-ups (some rather fetching candelabras are brought on for the acoustic version of Jigolo Har Megiddo) and Papa costume changes, evolving from elderly holy man to dashing, 1920s cabaret MC. If this, as The Nameless Ghoul told us, is only a fraction of what Ghost have planned, then get yourself front-row seats at The Palladium ASAP.

Satisfied with another induction into the cult of Ghost, a delirious KOKO empties onto the streets of Camden town. There’s one more chance to sneak backstage and grab a final word from our suspiciously well-informed Ghoul: “This was our 65th show in three months!” he notes breathlessly as he disappears inside that mysterious dressing room. “But, despite some wear and tear and some homesickness, it was definitely one of those nights when everybody stepped up and blew our remaining load. And had fun doing so!”