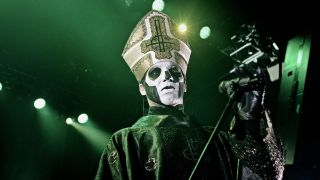 Bloodstock organisers have announced that Ghost will be headlining Saturday night at this year’s festival, joining Amon Amarth and Megadeth at the top of the Ronnie James Dio stage bill.

“We are absolutely chuffed to finally be playing at classic Bloodstock,” intoned A Nameless Ghoul. “Over the years we have heard so many great things about it and now, to be able to headline one of the nights, is a great honour and we are very much looking forward to it. Thank you all, and see you there!”

Bloodstock will take place at Catton Park, Derbyshire on August 10-13 2017. Tickets are on sale now.

In February, the band revealed that the follow-up to 2015’s Meliora would be “a little bit more apocalyptic, a little bit more back to the medieval times, which, obviously, is associated with darkness.”