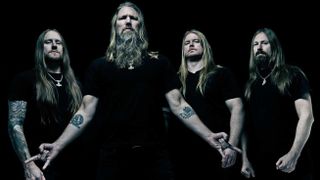 Bloodstock have announced the first batch of bands for 2017 – including Amon Amarth as Friday headliners.

Amon Amarth frontman Johan Hegg says: “What’s up UK! On August 11, 2017, we are invading Bloodstock. It’s going to be a fucking awesome party, with immense bloodshed and you better be there!”

Bloodstock 2017 takes place from August 10 to 13 at Catton Park, Walton On Trent, England.

Blind Guardian’s special guest appearance on Friday is a UK festival exclusive for 2017 and they are described as one of the bands most frequently requested by Bloodstock fans.

Testament will also play on the Friday, in support of new album Brotherhood Of The Snake. Hatebreed will perform on Saturday.

A range of ticket options for Bloodstock 2017 are available at the festival’s website.

This year’s Bloodstock festival was headlined by Twisted Sister, Mastodon and Slayer, while Gojira were picked by many as the highlight of the weekend.

At Bloodstock 2016, promoter Adam Gregory told TeamRock that nothing is decided at the festival without the input of the fans.

He said: “This is a metal festival by the fans, for the fans, and the reason we took a chance on giving Mastodon their first UK headline slot and having Twisted Sister up there was because that’s what the fans told us they wanted.

“We don’t hide away in an office. I’ve been walking around the site so much that my feet are killing me! I want every fan to have the kind of experience I would want to have a festival and I want them to have a good experience at every touch point at Bloodstock.”