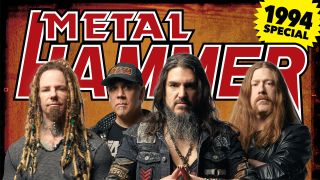 It was the twelve months that changed metal forever. Our new issue is dedicated to 1994, starring the one and only Machine Head.

Featuring a 1994 poster pack and a world exclusive Machine Head 25th anniversary patch, this is the ultimate celebration of the year metal went wild.

We talk to Robb Flynn about last year’s shocking fall out in the Machine Head camp, how he got Chris and Logan back in the band and what comes next.

Plus, Robb remembers the chaos and turbulence that gave birth to Burn My Eyes, the album that put Machine Head on the world stage.

The rest of the magazine is a celebration of the albums, the bands and the stories that defined 1994, a year which saw metal evolve into new forms and directions like never before.

We go inside the Downward Spiral – the album that made Nine Inch Nails legends.

And recall how Bruce Dickinson survived without Iron Maiden.

We also take a trip to Woodstock ‘94, a festival which saw the likes of Metallica, Nine Inch Nails and Aerosmith mixing it up with Aphex Twin, Sheryl Crow and, erm, Salt N’ Pepa

Black metal took its legacy and infamy to the next stage with Emperor’s classic, In The Nightside Eclipse

And we find out how three scruffy punks from Ireland stole the show at Monsters Of Rock.

Only in your new issue of Metal Hammer. Out now. Head here to get yours.