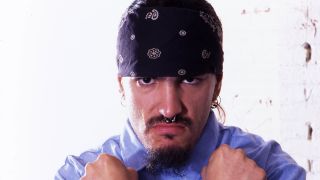 In 1994, Machine Head released Burn My Eyes, a groundbreaking groove metal masterpiece that secured their legendary status at the first attempt. We talk to Robb Flynn about their seminal debut record...

How does it feel to think that Burn My Eyes came out 20 years ago?

“I feel old! Ha ha ha! It blows my mind. I can’t even think about it. It’s ridiculous. What the fuck? Twenty years went by [clicks fingers] like that! It just doesn’t seem real. I remember when we put that record out, I was on a press tour and some guy said, ‘I can see you guys lasting for maybe five years…’ and it wasn’t meant as a compliment, but I thought ‘Five years? That’s a long time!’ I hadn’t even thought six months ahead at that point. So to be here 20 years later is pretty mind-boggling. I also remember another guy who said we should change our name to Mean Machine. Ha ha ha!”

Do you still recognise the guy that wrote those songs and made that album?

“No, I don’t really recognise that guy anymore. I hope people don’t take that the wrong way, but 22 years ago I was a drug-dealing, gun-toting, fighting-every-fuckin’-weekend asshole! I did some pretty shitty things. I don’t regret it, but I don’t feel that I’m that person anymore and I’m happy that I’m not! I guess I romanticise that time and other people do, too. It was real. Was I wading through bullets and hypodermic needles to get to my practice room? No. But it was pretty intense. They were crazy times. We were banned from every club in the Bay Area for months at a time.”

Does it bother you that some fans still regard Burn My Eyes as your best album?

“No. The clincher for me, and this rarely happens, is when someone says ‘You should write Burn My Eyes again!’, but it’d be so phony! I’m 47 years old, man. I’m not 24, fuckin’ running around on the streets. It was real and that’s why it came out the way it did. If I tried to do it now, it wouldn’t be real. Those times made me who I am and affected me forever and I’m fearless because of them, but I’d like to think that I’ve aged gracefully and I hope to continue to do that. How dumb would it be for some 47-year-old dude to be acting like some teenage gangster? It’d be ridiculous.”

Do you have one particular memory from 20 years ago that you cherish?

“Getting the Slayer tour. That was huge. A dream come true. The whole tour. We played in Dublin, Ireland, on the first show and we opened with Davidian. We got to the first chorus and everybody in the audience sang ‘Let freedom ring with a shotgun blast’ back at us, and I was like, ‘Holy shit! That was awesome!’ We out-sold Slayer on merch that night and it was crazy. It blew me away. There were a lot of highs back then.”

“The night I got signed to Roadrunner… it was October 10, 1993, and we all went out to a show in Oakland and got fuckin’ wasted. I’d been dabbling in heroin at that point, and I’d snorted it and shot it a couple of times. It was 1.30am and my buddy said, ‘Hey man, let’s go fuckin’ do some heroin and celebrate!’ I ended up ODing. And that shook me to the bone, man. It shook me to the fuckin’ bone. I could’ve fuckin’ died that night. My buddy died from the same bad batch of heroin a week later. That was a sobering moment. Everything in my being just poured into Machine Head from that point on.”

Why do you think Davidian still resonates with people so strongly?

Read more from Robb Flynn on Machine Head’s controversies, chaos and being The General in the new issue of Metal Hammer.