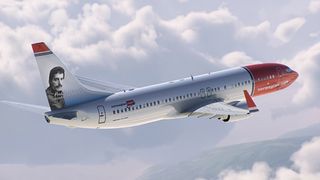 An artist's impression of the aircraft

An image of Freddie Mercury is to appear on the tail fins of two aircraft belonging to airline Norwegian.

The company have made the move to celebrate what would have been the late Queen frontman’s 71st birthday on September 5.

Norwegian’s chief commercial officer Thomas Ramdahl says: “As Norwegian continues its rapid expansion in the UK, our ‘tail fin heroes’ offer us a perfect chance to pay tribute to some of the greatest Britons of all time.

“Freddie Mercury inspired generations of music fans around the globe and it is a huge honour to have one of the greatest singers of all time adorn our aircraft.”

The first Freddie Mercury tail fin will take to the skies this summer when it will adorn a Norwegian Boeing 787 Dreamliner aircraft.

Earlier this week, Queen and Adam Lambert unveiled a new virtual reality experience titled VR The Champions, while the band recently released a new version of Monopoly based on life on the road with Queen.

Freddie Mercury: the Hendrix-obsessed teenager who became a megastar